Guess who fell in love with Padbol?

He is one of the most outgoing players in the world! That person who acts as if he really doesn’t care at all, but he is a “pro” in everything he does, such as playing with the ball. He was (and he is) the leading figure in each of the teams he was a part of, and he is really an outstanding person beyond the courts. But now, this is also true in Padbol. Yes. You figured it out!! Do you know who really fell in love with “fusion sport”? Zlatan Ibrahimovic himself!

The Swede also took his passion for sports, martial arts and the cameras to the courts among crystal walls. It was love at first sight! As soon as he discovered Padbol, Ibra wanted to play. Moreover, he is such a fan of Padbol that he made three Padbol courts in the impressive Padel Zenter sports complexes that his country has. In fact, he presented them together with the famous forward Henrik Larsson and the French pro, Paul Pogba.

Zlatan, whose name means “made of gold”, is another global megastar who joined the passion for our fusion sport. And, oh, it is so difficult to beat him! His huge height, technique and ability, such as his elasticity for certain impacts, make him a very difficult opponent to beat.

Would you dare to play against him? He already dared to venture into Padbol. He continues to compete professionally, recently becoming Italian Calcio champion with Milan, but he is already beginning to seriously think about becoming an expert in this sport. And, what about you? What are you waiting for? 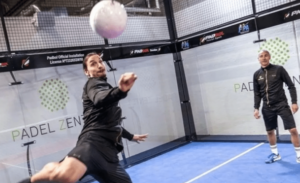